You are here:
Pests 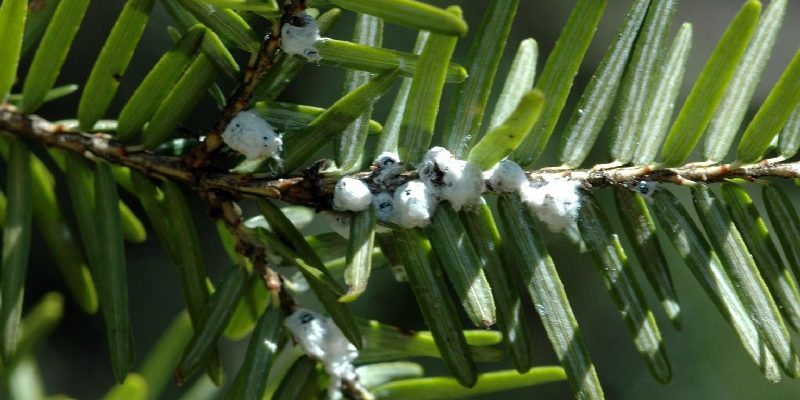 Native to Asia, the hemlock woolly adelgid (Adelges tsugae) is a small, aphidlike insect that threatens the health and sustainability of eastern hemlock (Tsuga canadensis) and Carolina hemlock (Tsuga caroliniana) in the Eastern United States. Hemlock woolly adelgid was first reported in the Eastern United States in 1951 near Richmond, Virginia. By 2005, it was established in portions of 16 States from Maine to Georgia, where infestations covered about half of the range of hemlock. Areas of extensive tree mortality and decline are found throughout the infested region, but the impact has been most severe in some areas of Virginia, New Jersey, Pennsylvania, and Connecticut.

Hemlock decline and mortality typically occur within 4 to 10 years of infestation in the insect’s northern range, but can occur in as little as 3 to 6 years in its southern range. Other hemlock stressors, including drought, poor site conditions, and insect and disease pests such as elongate hemlock scale (Fiorinia externa), hemlock looper (Lambdina fiscellaria fiscellaria), spruce spider mite (Oligonychus ununguis), hemlock borer (Melanophila fulvogutta), root rot disease (Armillaria mellea), and needlerust (Melampsora parlowii), accelerate the rate and extent of hemlock mortality.

The hemlock woolly adelgid develops and reproduces on all species of hemlock, but only eastern and Carolina hemlock are vulnerable when attacked. The range of eastern hemlock stretches from Nova Scotia to northern Alabama and west to northeastern Minnesota and eastern Kentucky. Carolina hemlock occurs on dry mountain slopes in the southern Appalachians of western Virginia, North and South Carolina, Georgia, and Tennessee. Eastern hemlock is also commonly planted as a tree, shrub, or hedge in ornamental landscapes. At least 274 cultivars of eastern hemlock are known to exist.

The hemlock woolly adelgid is tiny, less than 1/16-inch (1.5-mm) long, and varies from dark reddish-brown to purplish-black in color. As it matures, it produces a covering of wool-like wax fi laments to protect itself and its eggs from natural enemies and prevent them from drying out. This “wool” (ovisac) is most conspicuous when the adelgid is mature and laying eggs. Ovisacs can be readily observed from late fall to early summer on the underside of the outermost branch tips of hemlock trees (figure)

The hemlock woolly adelgid is parthenogenetic (all individuals are female with asexual reproduction) and has six stages of development: the egg, four nymphal instars, and the adult. The adelgid completes two generations a year on hemlock. The winter generation, the sistens, develops from early summer to midspring of the following year (June–March). The spring generation, the progrediens, develops from spring to early summer (March–June). The generations overlap in mid to late spring.

The hemlock woolly adelgid is unusual in that it enters a period of dormancy during the hot summer months. The nymphs during this time period have a tiny halo of woolly wax surrounding their bodies (figure 2). The adelgids begin to feed once cooler temperatures prevail, usually in October, and continue throughout the winter months.

The ovisacs of the winter generation contain up to 300 eggs, while the spring generation ovisacs contain between 20 and 75 eggs. When hatched, the first instar nymphs, called crawlers, search for suitable feeding sites on the twigs at the base of hemlock needles. Once settled, the nymphs begin feeding on the young twig tissue and remain at that location throughout the remainder of their development. Unlike closely related insects that feed on nutrients in sap, the hemlock woolly adelgid feeds on stored starches. These starch reserves are critical to the tree’s growth and long-term survival.

Dispersal and movement of hemlock woolly adelgid occur primarily during the first instar crawler stage as a result of wind and by birds, deer, and other forest-dwelling mammals that come in contact with the sticky ovisacs and crawlers. Isolated infestations and long-distance movement of hemlock woolly adelgid, though, most often occur as the result of people transporting infested nursery stock.

Cultural, regulatory, chemical, and biological controls can reduce the hemlock woolly adelgid’s rate of spread and protect individual trees. Actions such as moving bird feeders away from hemlocks and removing isolated infested trees from a woodlot can help prevent further infestations. State quarantines help prevent the movement of infested materials into noninfested areas.

Chemical control options, such as foliar sprays using horticultural oils and insecticidal soaps, are effective when trees can be saturated to ensure that the insecticide comes in contact with the adelgid. Several systemic insecticides have also proven effective on large trees when applied to the soil around the base of the tree or injected directly into the stem (figure 3). Chemical control is limited to individual tree treatments in readily accessible, nonenvironmentally sensitive areas; it is not feasible in forests, particularly when large numbers of trees are infested. Chemical treatments offer a short-term solution, and applications may need to be repeated in subsequent years.